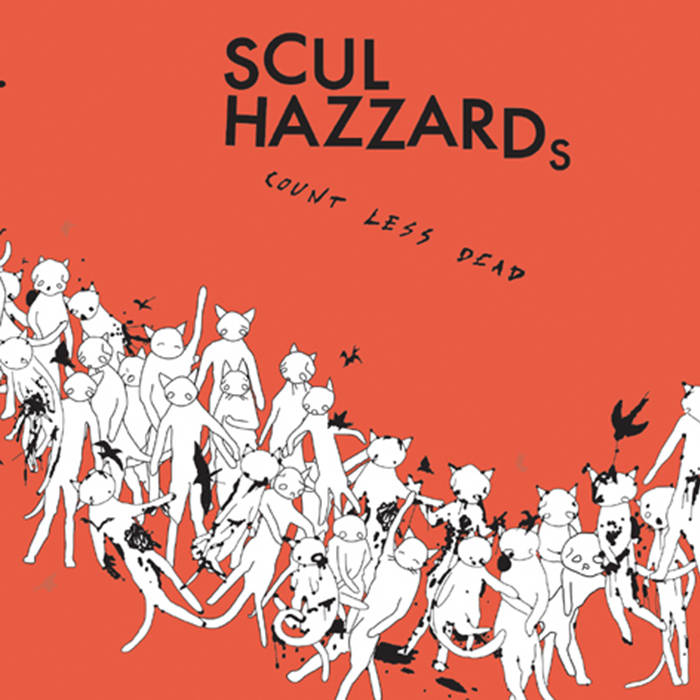 SCUL HAZZARDS: Count Less Dead Brisbane noise rockers SCUL HAZZARDs are released from the Count Less Dead. Currently based in London. After the great reaction to the first ep House of Heads late last year, soon after release singer Lachlan left to play bass for NZ band Die! Die! Die! while drummer Matt decided it was time to opt to play guitar in his own band Do The Robot. With such dynamic stage energy erupting from this ensemble and with much prompting it only seemed appropriate for Steve (guitar) and Tiffany (bass) to enlist Leigh on drums (Nightcrash, Shakes) and Steve take over the vocal noise. Their first show with this line-up was with The Mint Chicks in Brisbane and the dirt never settled. From there a series of shows followed with Die! Die! Die!, Batrider, The Meanies, Regurgitator... and finally Comets on Fire. From that show they formed a relationship with Grey Daturas and now head out on a dual Ep launch over May/June... and some shows prior to that with I Heart Hiroshima and Further. You cats time to get with the sonic massacre... �will have you scrubbing your extremities with wire wool and muttering "Unclean" before you know it, and then after that you'll dance yourself into a frenzy (or maybe the other way around). Either way, it roolz hard�. ( Inpress Single of the Week - House of Heads) �slightly more dishevelled rhythms than your tight jeans and flicked fringe spaz pop band� like a rudimentary Test Icicles with the poise of My Disco, all crazy shouted vocals and angular bassy rythms� (Blunt) www.myspace.com/sculhazzards SCUL HAZZARDS ep: V85 Count Less Dead