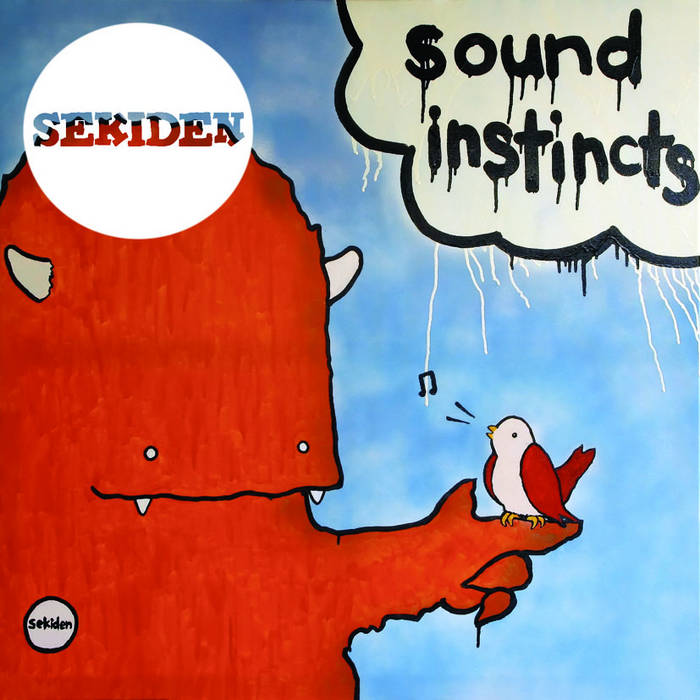 Sekiden are one of those legendary Australian pop combos who can’t put a foot wrong. Picture pitch-perfect showdowns between modulated sawtooth melodies and charmingly tidy guitar chug, making for dense, forthright fuzz-pop. Expertly executed! Certain lyrical references suggest these cuddly cartoon heroes have gone bizarro (at least to some extent) and are now determined to worm through this evil world of cash, coke and cocksuckers. Lead single ‘Up In The Air’ is a spiky pop hit detailing the social, physical and mental hell of a few too many chemical comedowns whereas ‘Goons In Charge’ is a two-finger salute urging the Trumps of the world to become Rivkins. I’m pretty sure I heard guitarist Simon casually mention “chronic” in ‘Missin Yr Kissin’ as well… They’re still mending wounded hearts with Sanrio band-aids, but there are beads of bitterness seeping through the splits in their kawaii veneer.
by Adrian Trajstman
(Mess + Noise: www.messandnoise.com/releases/5463)

Brisbane power-pop trio Sekiden have released their second full-length album Sound Instincts. A follow-up to Junior Fiction (released in 2004), Sound Instincts explores more territory than their acclaimed debut, and has been released on Valve Records â€” responsible for Regurgitator, amongst others.

Shying away from the conventional recording studio setting funded by a record label (having recorded Junior Fiction at Black Box studio with Magoo), Sekiden decided that they would attempt what some musicians would steer clear of â€” recording and producing in their own studio. So, a studio was built under drummer Mirko’s house (complete with a resident snake).

Sound Instincts kicks off with ‘Up in the Air’, a track that has been receiving quite a bit of airplay of late. Opening with their trademark cutesy synthesised sounds, at first it seems as though this release isn’t going to break any new ground for Sekiden. However, it soon becomes apparent that a more rock sound is intended this time around. This is particularly evident with the track ‘Missin Yr Kissin’, of which guitar seems to be the focus (rather than the usual keyboard). That said, although Sekiden are branching out into new territory with ‘Sound Instincts’, there are still enough tracks in ‘classic Sekiden’ style for those who have been long-time fans. Those that stand out include ‘Artificial Sweetener’ and ‘Save Our Suburb’.

The great thing about Sound Instincts is that it could very well earn the band some new fans, while at the same time retaining the ones they already have. On the live front, it’s well worth checking Team Sekiden out if you haven’t had the pleasure of seeing them before (or even if you have). Those of us in Brisbane have had countless opportunities over the years to enjoy them, having played many a show at Rics or the Ramone-a-thon. If you live elsewhere and Sekiden are coming to your town, don’t pass up a great opportunity to see one of Australia’s more interesting, talented and, indeed, charming bands. I’m sure that Simon, Seja and Mirko would appreciate your support.
(Faster Louder: www.fasterlouder.com.au/reviews/music/5006/Sekiden--Sound-Instincts)