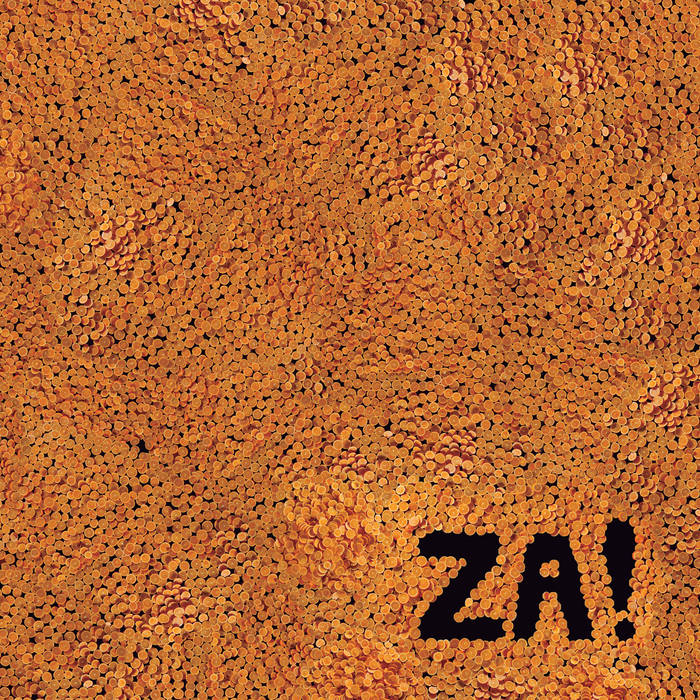 Two people in front of your eyes, yet a transoceanic, futuristically primitive orchestra in your ears. Spazzfrica Ehd & Papa duPau, the duet from Barcelona known as ZA!, keep on their post-world music conquest with their best album so far: WANANANAI.
Always acclaimed by their intense, ever-changing live sets (best live band in Spain according to many national magazines), ZA! have recorded an album that stands for their shows and will even surprise their fans with new sonorities and beats. Almost 60 minutes of unrelenting and rhythmically wicked music hard to label: Battles being more organic, Lightning Bolt being more harmonic, Animal Collective being more aggressive, Steve Reich being less serious.
WANANANAI is a compendium of genres hard to imagine and hard to explain without the listening experience. Spazzfrica Ehd & Papa duPau have extended their musical spectrum, adding Cuban jazz vibes mixed with post-rock (as in El Calentito), Jamaican dancehall mixed with grunge (like in Súbeme el Monitor), intelligent dance music mixed with industrial noise (as in Tueste Natural), or balinese melodies mixed with Black Sabbath (as in Cha Cha Cha). They even dare to perform a hip hop song (Mr.Reality) that could fit in the first albums of A Tribe Called Quest. And what is more suprising: it all makes sense. After a whole listen to it, you quickly realise the unity and the singularity of this album:
WANANANAI is a statement of freedom, an hour of music that proves that experimental music can be euphorical, intense, fun, headbanging and even danceable sometimes.
The instruments in the recording are numerous: drums, guitar, keyboard, trumpet, voices, sampler, percussion. All processed through many analog effects, recorded live loops, and played just by 2 people: Spazzfrica Ehd (drums, keyboard, percussion, voice) & Papa duPau (guitar, trumpet, sampler, voice).
WANANANAI -the fourth album in their seven years career- will be released by ZA!’s own label, Gandula, in conjunction with Valve in Australia. The duet has also designed all the artwork (all the text characters are figures made by their own bodies!).
Hyperactivity is easy to notice in ZA!’s music and also in their actions: the duet has composed this album during the last two years, combining their shows around the globe with the making of theater plays, an exhibition at the Joan Miro Museum in Barcelona and the direction of an improvisation orchestra. Since the release of their previous album, “Megaflow” (2011), ZA! have participated in all kinds of music festivals (they are Primavera Sound favorites participating in 4 editions of the festival, Sónar Festival favorites participating in the Sao Paulo & Barcelona editions, SXSW Texas, Fusion Fest, Eurosonic, Les Trans Musicales etc), with all kinds of bands (Lightning Bolt, Yellow Swans, Extra Life, Zu, El Guincho, Delorean, And You will Know us by the Trail of Dead, Peter Brotzmann etc), in all kinds of countries (USA, Canada, UK, Brazil, Russia, Portugal, Germany, Holland, Belgium, France, Switzerland and of course Spain), always with an excellent reception. They have also collaborated with musicians like Damo Suzuki (Can), Angel Deradoorian (Dirty Projectors) or Alex Dunham (Hoover, Regulator Watts).
All of this has been done so far. But in times of conformity, world economic threat and general fear of the future, those who call themselves ZA! have thought that the most reasonable thing is to risk it all, even more. The music in WANANANAI and the way of releasing this album is the proof of it.
*SINGLES: track 5. Súbeme el Monitor / track 9 Mr Reality / Track 3 Gran Muralla China / track 2. Gacela Verde
ZA! on the web:
www.facebook.com/putosza