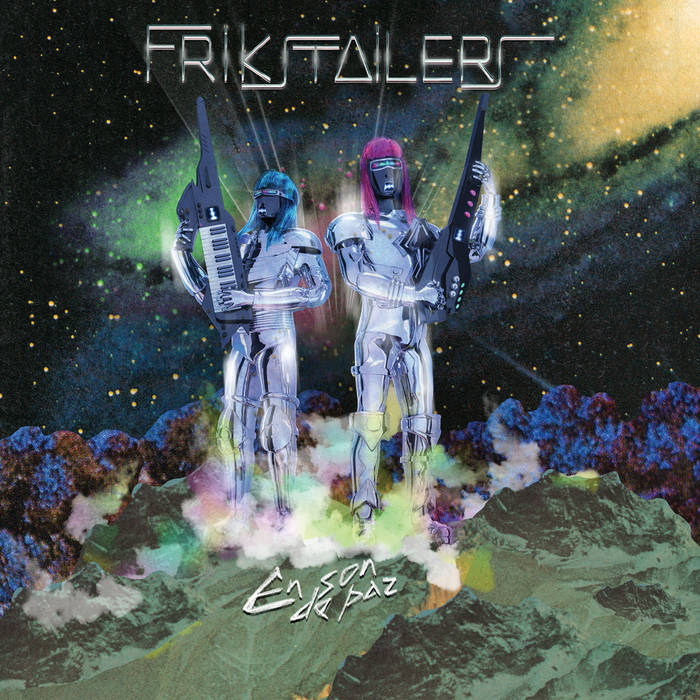 FRIKSTAILERS (pronounced freak-stylers) rose from the eclectic Buenos Aires cumbia scene, turning the genre on its head with their unique style that saw Fader magazine describe them as "cumbia circuit-bent through neon dance tunes that interpret the most electric side of South America”. Bringing their incomparable brand of South American rhythm to London in December 2012, they headlined the taste-making Boiler Room and played a hyper-animated show at the New Empowering Church. In October 2013 they surprised MUTEK Mexico with a brand new side project called "Klik & Frik" mentioned by XLR8R as one of the best 11 shows of the festival.
To complete an eventful year, they toured Europe twice chosen as the closing act of the night for festivals such as Transmusicales (Rennes) and Worldtronics (Berlin). The duo of Rafa Caivano and Lisandro Sona released their first LP on ZZK Records entitled "En Son De Paz" in February 2013. This 12 track journey through time and space caught the attention of NPR, XLR8R, MTV Iggy, Zona de Obras and the French Mondomix, and was recently chosen as one of the top 10 albums of Latin indie music of 2013 by the prestigious Spanish newspaper El Pais. Their previous release "Bicho de Luz EP" (ZZK, 2010) also garnered critical acclaim, with Resident Advisor describing them as having taken "a sound as old and ‘Western’ as hip-hop and fleshed it out brilliantly with regional touches.”

In June this year the Frikstailers released their new EP, Crop Circles on ZZK Records. The single is a taste of what’s to come, a sound they’ve been exploring for the last year or so. It’s an intense musical journey, which together with their signature slow burning sound, features 80’s synths and an elegant dose of psychedelic tropicality. Notching up further accolades with their inclusion on Modeselektor’s recent Modeselektion Vol. 2, and having remixes released by DFA Records and Young Turks/Mad Decent/XL Recordings with their El Guincho remix banger, as well as remixing World Music giants such as Amadou et Mariam and Gotan Project, the Frikstailers are primed for the inter-planetary big time.

From Argentina via Mexico backflipping around the globe for their debut visit to Australia… TROPISTRALIA 2015.

Frikstailers (pronounced ‘freak-stylers’) rose from the eclectic Buenos Aires cumbia scene, turning the genre on its head with their unique style. Releasing their first LP En Son De Paz in late 2013, it waschosen as one of the top 10 albums of Latin indie music by the prestigious Spanish newspaper El Pais and will be available locally on Valve/MGM. Frikstailers released their new EP Crop Circles earlier this year - from tropical ambience to 1980’s synths and psychedelic sounds - available here for free zzkrecords.com/cropcirclesep

“Cumbia circuit-bent through neon dance tunes that interpret the most electric side of South America” - Fader magazine.